support for the preservation in the national cultural heritage of the Republic of Polandof the "CorvinusCatalog" – a priceless, Renaissance manuscript of the Florentine school, inscribed on the UNESCO World List of "The Memory of the World" Program – the most valuable relic in the collection of the Voivodeship Public Library – Copernican Library in Toruń. 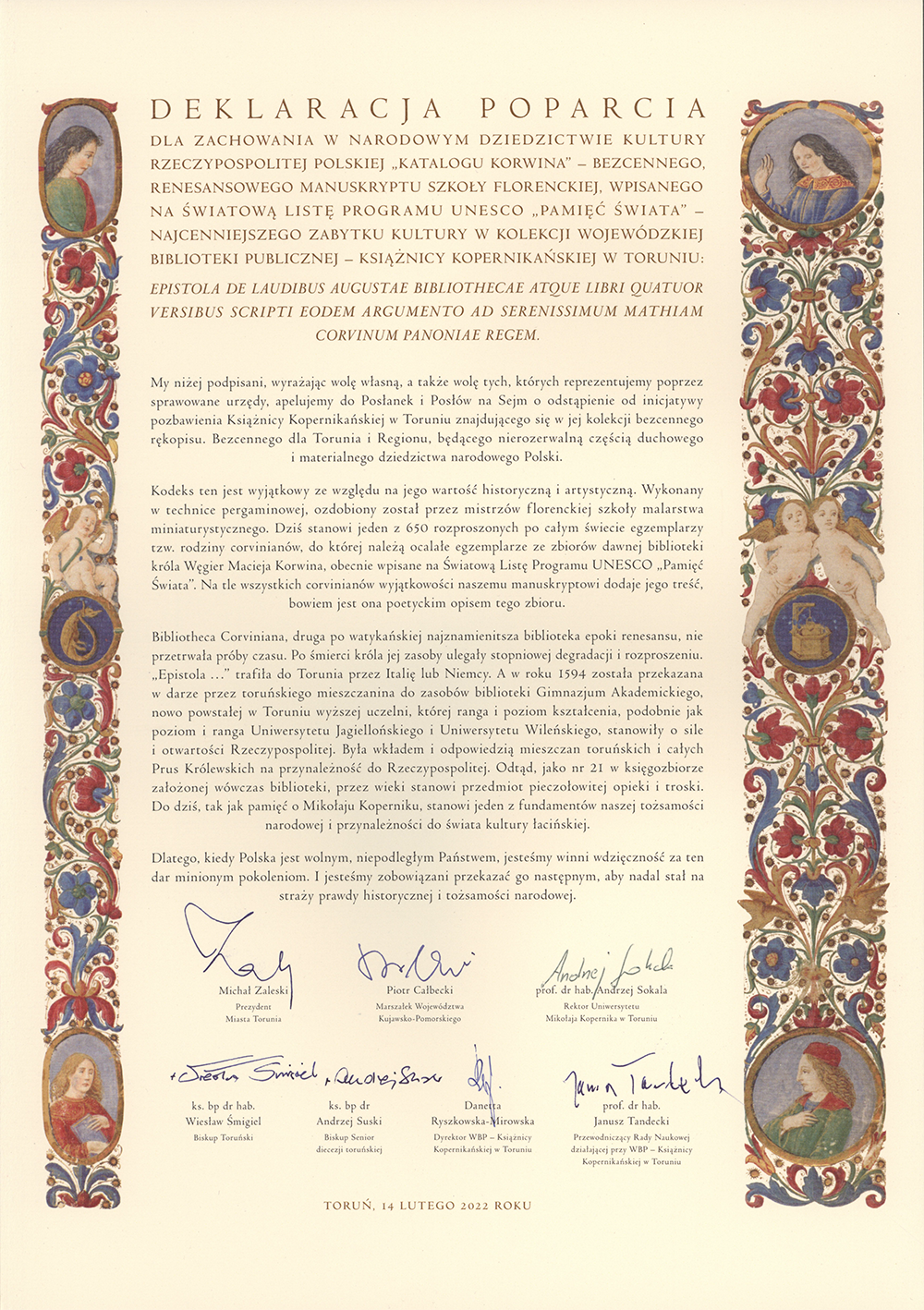 for the preservation in the national cultural heritage of the Republic of Poland of the "Corvinus Catalog" – a priceless, Renaissance manuscript of the Florentine school, inscribed on the UNESCO World List of "The Memory of the World" Program – the most valuable relic in the collection of the Voivodeship Public Library – Copernican Library in Toruń:

We have already been supported by 27448 people

Counter updated once a day

We, the undersigned, expressing our own will, as well as the will of those who we represent through the offices held, appeal to the Members of Polish Parliament to withdraw from the initiative of depriving the Copernican Library in Toruń of the priceless manuscript in its collection – invaluable for Toruń and the region, being an inseparable part of the spiritual and material national heritage of Poland.

This statute book is unique for its historical and artistic value. It was made in the parchment technique and decorated by the masters of the Florentine school of miniature painting. Today it is one of 650 copies of so-called The Corvinian Family, scattered all over the world, containing survivor copies from the collections of the former library of the Hungarian king Matthias Corvinus. They all are currently inscribed on the UNESCO "Memory of the World" Program World List. What makes our manuscript exceptional and unique is its content – a poetic description of the whole collection.

The Bibliotheca Corviniana, the second after the Vatican most important library of the Renaissance, did not stand the test of time. After the king's death, its resources were gradually degraded and dispersed. Epistola… found its way to Toruń via Italy or Germany. In 1594 it was donated by a Toruń burgher to the library of the Academic Gymnasium, a newly established university in Toruń. The rank and level of education of this university, as well as the Jagiellonian and Vilnius Universities, determined the strength and openness of the Republic of Poland. It was an evidence of affiliation to the Commonwealth by the citizens of Toruń and the entire Royal Prussia. Since then, throughout the centuries, the book with No. 21 in the collection of the library founded at that time, has been the subject of exceptional care and concern. To the present day, just like the memory of Nicolaus Copernicus, it is one of the foundations of our national identity and connection to the world of Latin culture.

Therefore, now when Poland is a free and independent country, we owe this gift to past generations and are obliged to pass it on to the next ones, so that it will continue to guard the historical truth and national identit.

for the preservation in the national cultural heritage of the Republic of Poland of the "Corvinus Catalog" – a priceless, Renaissance manuscript of the Florentine school, inscribed on the UNESCO World List of "The Memory of the World" Program – the most valuable relic in the collection of the Voivodeship Public Library – Copernican Library in Toruń:

The Codex is one of the most valuable 15th-century manuscripts in Poland. It has been located in Toruń since the 16th century and is part of the historic book collection of the Copernican Library. Due to the care shown to him and the over 400-year period of storing the work in Toruń, it is inextricably linked with the city and its history on the UNESCO World Cultural and Natural Heritage List. 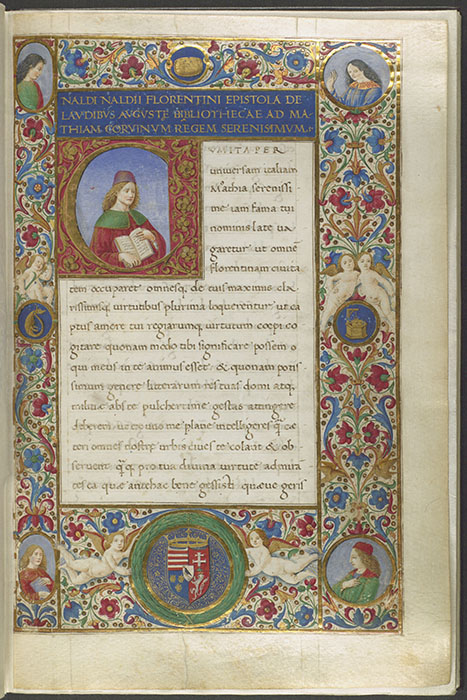 Until the next session of the Parliament of the Republic of Poland, during which a decision on the fate of the manuscript may be made

Due to the large number of questions about the Code of Maciej Corvinus - you ask about its origin and history,

Its meaning for Toruń and Poland - we present a lecture by prof. Bartosz Awianowicz

"On the close ties between the Naldus Statute Book and Poland".

About the relationship of the Naldus Statute Book with Poland

We sincerely thank all the people and organizations that support our initiative.

Apeal of the Regional Parliament of the Kujawsko-Pomorskie Voivodeship

Regional Parliament of the Kujawsko-Pomorskie Voivodeship

How can you help?

Encourage your friends and relatives to stand up for this priceless piece of 15th-century literature as well.